“Chronicles of a trip by the Franciscan legacy in Yucatán”

Let’s continue the adventure, this time we are going to start with MAMA, which already sounds promising.

They left Tekit with the greatest satisfaction, their weekend had been all they expected so far. Still heading southeast of Yucatán, 10 minutes from Tekit, they stumbled upon MAMA “El agua del abuelo materno”  a.k.a. “Grandfather’s maternal water” (yeah we still don’t know what is up with these names). Beautiful temples as well as the franciscan ex-convent can be seen here, both really wonderful.

They kept driving and reached Chumayel “Lugar de las semillas” (The seed’s place), according to some of Yucatan’s history books, this is the birthplace of the mayan’s most sacred document; “El Chilam Balam”.

You can visit the “Purest Conception” convent built in the XVI century, here is where the famous black wooden Christ is, you can ask the locals for more information regarding this matter.

Seven minutes further into the souteast road you will find Teabo “Tu aliento” (Your breathe). According to locals, this place is known for 2 attractions: The Parish and the Ex Convent of San Pedro and San Pablo, which were built during the XVII century.

Inside there’s an altarpiece with a couple of caryatids columns and the Chapel of the Indians.

Hunger was starting to invade their stomachs but managed to stay alive till they reached Maní, where the most emblematic of all convents is, due to the tragic story behind its walls. Nevertheless. few people know the story, “Auto de fé de Maní“, by Fray Diego de Landa, one of the most important evangelizers of all times.

Story tells that in the convent’s atrium, Landa destroyed a big part of the cultural heritage as well as some codices from the ancient mayans, the reason is still unknowed but, to this day it has been considered as one of the darkest and saddest moments in Yucatan´s history. The convent has been dedicated to San Miguel Arcángel, the first ever built in the state.

They could not miss the opportunity of eating at the famous “Príncipe Tutul Xiu”, where (according to locals and tourists) you can find the best regional dishes, handmade tortillas, limemonade and a variety of delicious sauces.

Everything about this place is a delight, it was very difficult for them to leave, but the journey had to continue. Next stop: Oxkutzcab.

Don’t miss the outcome of this adventure on the next episode, here on mayantravel.net! 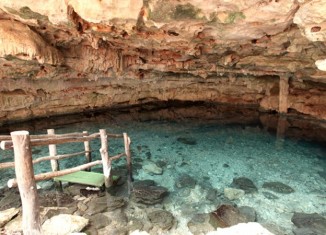 Sep 12, 2014
0 4834
An abyss of emotion... Located in San Antonio Mulix, the water of these two sinkholes is perfect for summer, they become refreshing refugees for the...