We wanted to up the ante of our last vacation, where Cozumel was our paradise destination. It was hard to find a place to compete with the beauty of the Island of the Swallows, and it wasn’t about comparisons. So, we raised the stakes… geographically-speaking, and headed a few miles up the reef to Isla Mujeres.

We crossed by car, on the ferry from Punta Sam (the trip lasts 45 minutes and for a sedan with four occupants we paid 420 pesos). Bad decision. If you travel to the island whose women captivated Francisco Hernandez de Cordova’s troops, cross without a car. It’s not necessary. The destination is not made for cars but for golf carts, scooters and taxis. When visiting Garrafon Park where for $800 pesos per person you can enjoy a natural paradise all day “the response we received when we asked about parking left us speechless: “We don’t have any.” Excuse us” “We don’t have parking. But you can leave your car on the street…just pull it off to the side, out of the way.” The park’s beauty made us forget our worries that someone could hit the car…or it could be towed (is there even a tow truck on the island?). We stayed at the Mía hotel, which covers the island’s entire northern tip bearing the PAN (a Mexican political party) name of El Yunque, which is reached by a bridge made from wooden piles. It’s not advisable to go by car there, either. Like Garrafon, the hotel has no parking. “Leave it there, off to the side,” we were told. It wasn’t bad service or rudeness. We were the strange ones, for coming in a car. If you plan to go, believe me, leave your car in Puerto Juarez or Punta Sam. They even offer weekly and monthly package plans. After several years away from the island, we had almost forgotten that wherever you look, the view is spectacular. But the part of the island the hotel is on is even better. The guest reviews we read on the internet were all true: some parts of the hotel are still under construction, the service is not the best, the rooms are small…but watching the sun rise from one window and set on the other, and looking and listening to the sea crashing against the rocks on one side and gently rocking on the other, creating a natural pool, is stunning! Who cares about small rooms, mediocre service and unfinished construction” Isla Mujeres is an example of Mexico’s unequalled natural paradises. The island, which is only seven kilometers (about 4.5 miles) long and less than a thousand meters wide, is located on the reef chain that runs along Quintana Roo’s coast. It’s practically an offshoot of land that used to be part of the mainland 5,000 years ago. The island has the charm of isolation but with mainland’s bustle, the intimacy of begin able to walk everywhere and multicultural openness, and it’s clear that you don’t have to be Hemingway, Camus or Garcí­a Márquez to absorb inspiration in a natural paradise. Here it springs up by itself. The island is freedom guarded by water. It’s a gentle aquarium and raging sea. It’s a swarm of golf carts (available for rent from 120 to 150 pesos per hour), which cover the whole island in a few minutes. In a hurry or relaxed, alert or carefree, its cosmopolitan occupants enjoy the view and the breeze with a touch of the pedals and a turn of the steering wheel. The most bustling area, however, is down below, with the frenzy of fish that constitute a vast aquarium that live around and feed at the reef. If not a “silent world,” as Jacques Cousteau called it, the motley crew of fish would be a noisy scandal. We recommend trying snorkeling to enjoy this underwater world. The waters where swimming is permitted are not very deep, so snorkeling is a great way to enjoy the underwater paradise. If you want to go deeper, you can take some quick scuba lessons with instructors who you can find along the boardwalk. On the same endless boardwalk you can take boat tours to nearby areas, either around the reefs bordering the island or even farther away to Isla Contoy, where another paradise worthy of bragging about on your social networks awaits. In either case, the boats have good quality life jackets, masks and snorkels for those aboard. When planning your next vacation, don’t discount the possibility of a visit to Isla Mujeres. If you’re looking for clubs, partying or spring breakers, it’s not the best place. But if you want to enjoy a spot that shows just how splendid nature can be, you’ll spend a great few days here. And be sure to visit the sculpture park of Punta Sur, which ends with the Ixchel sanctuary, the Mayan goddess of love and fertility, consisting of a small altar that stands right at the point where the morning sun’s rays fall on Mexican territory for the first time. The park can be reached by golf cart, scooter or taxi. There is one more access, from Garrafón, which we discovered because Tania, our daughter, wanted to go down a path along the side of the island, on the edge of the sharp rocks shaped for millenia by the harshness of the sea. Sounds good, doesn’t it?

A visit to the past.

El Meco is a very important archeological site in Quintana Roo, which has the tallest building in the area, “El Castillo.”

You can walk around this small Mayan city and feel the connection with all the archeological sites and at the same time notice what makes them different from one another. It’s one of the few sites in good condition. It’s not well-known, which means fewer tourists, but that doesn’t make it any less important: there have been several important studies affirming the site’s relevance.

Located at about the 8.2 km mark. Go south on Lopez Portillo No. 180, which will take you to the area.

It’s possible that it’s closed at some times of the year, but because of its importance and interest in its buildings, the Centro INAH Quintana Roo authorizes visits if scheduled in advance with the center. It’s proximity to Cancun means it’s convenient to visit. Parking, restrooms and rest area.

When the aquatic and art combine, MUSA is what emerges.MUSA is an underwater museum that today is one of the most visited in the world. With sculptures among reefs in crystal waters and learning about the history of Mayan evolution while watching an endless parade of marine species that vist the museum daily, you’ll never experience anything like this again.

“MUSA is a not-for-profit organization that works for the conservation of Quintana Roo’s marine natural resources while providing a dynamic platform for modern art. Please, support us by becoming a Friend of the Museum with a contribution. We have recently submerged a new series of sculptures in the Nizuc area of MUSA. The new pieces by Jason deCaires Taylor allow for coral to propagate and are exclusively designed to filter nutrients in the water. MUSA now has a new “”dry”” gallery located on the 2nd floor of the Plaza Kukulcan Plaza in Cancun’s hotel zone, which is free and includes numerous museum sculptures, images and films.”

Take a boat from Cancun.

Bring a bathing suit, sunblock, towel and extra money. There’s a $5 fee for reef entrance (Parque Marino), $3 fee for use of the pier and $1 fee for conservation and care for MUSA sculptures.

An acquatic and earthly paradise where your dreams will come true

Garrafon is an exotic destination for all those who love adventure. The park has beautiful reefs and cliffs where you can get an incredible view of the Caribbean. Take a bike tour, go ziplining or kayaking, swim with dolphins, take a dip in the pool, scuba dive on the reef or just take it easy in a hammock. Garrafon has everything you need to have a vacation worth repeating.

A place on Earth exists where you can meditate, dream, relax and indulge: Parque Natural Garrafon, a paradise on Earth of reefs and cliffs looking out over the turquoise waters of the Mexican Caribbean. Only 25 minutes from Cancun on the beautiful Isla Mujeres island, this natural park is known around the world for its beauty and great recreational activities like snorkeling, kayaking and excursions to the cliffs. Experience everything Parque Natural de Arrecifes Garrafon has to offer and make memories that will last a lifetime. Don’t miss out!

Many boats leave from Cancun every day. After a ride of only 25 minutes you arrive at Parque Natural Garrafon, which offers tour packages that include the trip.

Bring a bathing suit, sunblock, towl and extra cash. For you safety we have life jackets, safety harnesses for ziplining, helmets, lines, steel cables, everything to avoid accidents. Help us protect the environment using biodegradable sunscreen and sunblock. Outside food and beverages aren’t permitted inside the park. Remember, it’s important to respect the area you’re visiting and keep it clean.

Its sea views, coral reefs and beaches have made this place one of the most outstanding in the world, a place ideal for tourists who seek it out for its white beaches and warm weather.

Isla Mujeres has everything to be considered a marine paradise, with its crystalline waters and unique reefs, among other attractions. Let yourself be captivated by the splendor of sea, sky and tropical jungle, a combination rarely seen in other places. This is the perfect place to spend your vacation and indulge all five of your senses. You can’t leave without trying some of the best restaurants’ seafood dishes or experiencing the island’s night life.

By car: From Punta Sam there are ferry services that take 45 minutes. On comfortable speedboats: From Puerto Juaréz they leave every half hour and take only 15 minutes. On cruise ships, ideal for tourists: From the Hotel Zone in Cancun they have different schedules and take 35 minutes. There’s also a light aircraft ride directly to Isla Mujeres.

Other interesting sites include Cozumel and Holbox, which share the same natural beauty but with a unique experience. Cancun is also a must, as is the Chichen Itza archeological site, one of the wonders of the world.

Inaugurated in 2009, Bahía Chac Chi is set in the heart of Isla Mujeres, just steps away from downtown restaurants, shopping & entertainment, the main ferry port and the powder white sands of Isla Mujeres North Beach.Boasting a contemporary architectonic design, Bahía Chac Chi invites its distinguished guests to enjoy its modern facilities, top of the line amenities and the magnificent views of The Mujeres Bay, the Turquoise blue waters of the Caribbean and Cancuns famous Hotel Zone skyline.

Facilities: The modern facilities of Hotel Bahía Chac Chi harmonize with the natural elements of the Island of women Isla Mujeres.Sand, water and sun invite to relaxation keeping us in touch with nature; Ticul stone and sea shell incrusted floors offer a pleasant and one of a kind design.Pool: Unwind and cool off at our pool area after a day of sun bathing in Isla Mujeres beautiful beaches; conveniently set next to our lobby bar, we offer a wide variety of cocktails and spirits for that moment of relaxation.Accommodations: Amenities in every room where selected to ensure maximum comfort for an unforgettable stay. Places with all necessary services for personal care.Digital safety deposit boxes.Meeting Room: The hotels highest floor holds our private function room, offering capacity for up to 80 people and amazing views of the Caribbean and Mujeres Bay.El Rey Snack Bar & Coffee: Enjoy a wide variety of cocktails and tropical drinks at our lobby bar. 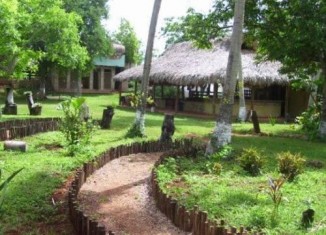